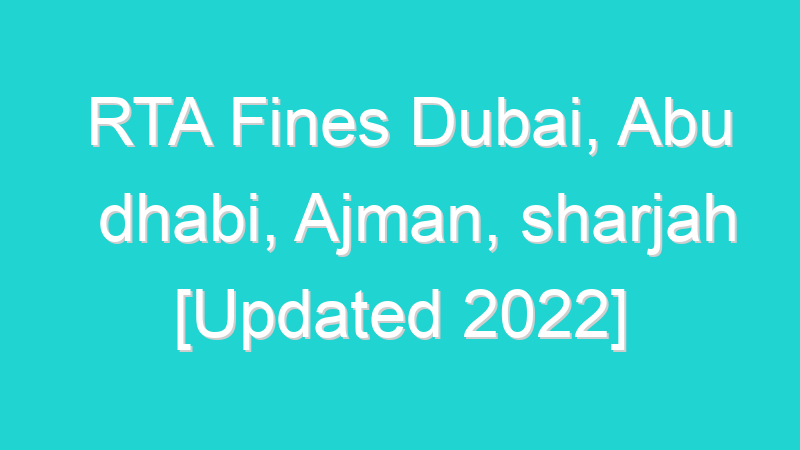 If you are planning to drive in Dubai, you must be aware of RTA fines, which are enforced by the Roads and Transport Authority.

Dubai is the city’s sheer diversity; it is famous for luxury shopping, sightseeing attractions, and a lively nightlife scene. More than 15 million people around the world visit Dubai every year.

Some of them might be visiting Dubai on a vacation trip; some are moving to Dubai for a job.

They must witness here a strong gearhead ethos, lots of red Ferraris growls on the road, Rolls-Royce convertible prowl the boulevard, and ringing the world beautiful tallest building.

Dubai is the place of the world’s beautiful, luxury supercars, it may set you in motion, and you too want to growl on Dubai roads.

Did you watch Fast and furious 7, when Vin Diesel and Paul Walker jump from the skyscraper to another?

I love the scene too, but believe me, in reality, driving in Dubai, you must be very careful!!

More than 4000 citations to the drivers had issued last year by Dubai police officers, and all vehicles had unclear license plates.

The drivers who hadn’t intended to break the traffic rules were let off with a simple warning.

But the number of the ticket that was issued shows that how The Roads & Transport Authority Dubai are active and observing the roads as they are looking for drivers who intend to violate the traffic laws.

Roads and Transport Authority is updating its list of fines with severe penalties to ensure that all drivers have safe driving experience in Dubai.

Whether you’re a new driver or an experienced one or even a pedestrian, you must be aware of traffic law in Dubai to avoid unnecessary fines.

In this list of we split the violation into three main categories that include;

In the table, you will understand the violation type, the total amount of penalty in AED/Dirhams, and other extra penalties associated with these violations.

Over speeding fines in Dubai 2020

This is the Dubai TRA fines list if you are a catch to be driving over or under the particular limit on the road.

This is the list of fines in Dubai for dangerous and reckless driving;

There is also some scenario where Dubai police will issue a fine, let’s take a look;

What is the black point system in Dubai?

You might be wondering what the black points are?

Well, they are the points issued to driver’s license, when police caught the driver violating the traffic laws.

The black point introduced by RTA to ensure safe and sound driving on the Dubai roads.

If any driver got 24 black points, their license would revoke, and they will ban from driving for a year.

Paying traffic fines is now very easy; to make the system smooth and quick, Dubai allowed different portal and ways where you can submit your Fines.

Now you can pay your fines at;

Abu Dhabi is the second more popular city after Dubai. If you are planning to drive in Abu Dhabi, you must be aware of the traffic rules of the roads.

Responsible, safe, and sound driving is the duty of every driver in Abu Dhabi. If you are following the rules, you will not only avoid the severe traffic Fines but will also enjoy the sightseeing attraction along the safest drive.

Now anyone can inquire about RTA fines and can pay for the traffic violation using your traffic ID, license number, or car plate number online.

You can make online payment unless you’re instructed to RTA departments.

You can register on the Abu Dhabi government portal using by your PIN or Emirates ID, click here

How can I enquire about my traffic fines?

You can enquire about your RTA fines; you can do it by;

Driving on the Ajman roads is fun, but you aware there are also some severe penalties and fines to make the roads safe and sound for all vehicles by RTA department Ajman.

Ajman traffic fines 2019 are implemented by RTA to ensure the betterment and safety of all citizens and states.

Ajman is an essential city in the UAE, which has a vast number of people that drive on the roads.

Being a metropolitan city, heavy traffic, and the safety of all citizens, therefor Ajman RTA fines are incredibly high.

Traffic rules in Sharjah taken very seriously, and Sharjah traffic fines 2019 are implemented by RTA for the safety of every driver.

There is a massive influx of traffic between Sharjah and Dubai through the main highway, which means there might be more violations than other cities of the Gulf.

Sharjah fines are there in place to avoid the violations and accidents because, without these strict penalties, it is hard to control such dense traffic entrance between Sharjah and Dubai.

So, traffic rules are the key factor in having a safe and sound drive.

You can also get information by calling on the helpline; the support will give you comprehensive and easy to understand information about the RTA fines list 2019 in Sharjah.

How to pay fines in Sharjah

If by any chance, you violated the traffic rules in the Sharjah and picked the fines tickets, there are many ways you can use to pay the fines.

Sharjah Municipality announced four physical locations where you can visit in person and pay it off;

But if you are living in another Emirate, you can also have a choice to pay Sharjah RTA fines in any Roads and Transport Authority office in Dubai or any traffic police station.